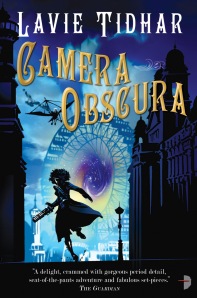 After the pure enjoyment factor of The Bookman, the first novel in the loosely connected Bookman Histories, it was hard not to be excited to push forward onto Camera Obscura. While The Bookman was the adventure of a young man in search of lost love, Camera Obscura is a steampunk noir murder mystery featuring a kick ass heroine and a pile of bodies that keeps getting bigger. It is sort of a Chandler-esque gumshoe story crossed with League of Extraordinary Gentlemen style steampunk that pulls characters from all sorts of different works and puts them in strange situations.

Milady de Winter is a brilliant character so well-written that she begs to reappear. To compare her to female heroes in other novels and different mediums is to do her an injustice, as she is completely unique in her badassery. Strong black characters are rare in science fiction to begin with, and strong black female characters are even fewer and further between. Tidhar using a minority character in a steampunk setting is refreshing, and to have her be as strong a character as she is makes for excellence. Although the novel is enjoyable on its own merits, the most memorable part of Camera Obscura is surely its protagonist.

A little bit more than halfway through the novel, a traumatic and extraordinarily violent episode for Milady de Winter happens that not only changes her character significantly but changes the tone of the novel so drastically that it feels like a completely new story. While the first half is pretty straight forward (and enjoyable) point to point murder mystery, the second half reads like a twisted existentialist fantasy that is interesting but sometimes hard to follow and more difficult to enjoy. Tidhar obviously is a brilliant writer whose prose is careful and exciting with characters that leap off the page, but the change in mood makes the end result of Camera Obscura feel a bit more disjointed than it should.

Although it is easy to enjoy Camera Obscura without having read its predecessor, it is recommended that you read The Bookman first to get a sense of the world that the story takes place in before moving into this second installment. Both novels are completely unique experiences that are nothing like anything else in steampunk. Despite their flaws, they are essential reading in the steampunk subgenre, as being unique in the world of zeppelins and goggles is something that just doesn’t happen too often.

Android Dreamer is a website dedicated to science fiction and fantasy, including reviews, interviews, and news, with an emphasis on self-published and independent works.